A Letter From David on Day 105

I survived 40 days in the ICU which included numerous surgeries, Ecmo https://www.chop.edu/treatments/extracorporeal-membrane-oxygenation-ecmo and the installation of 2 Artificial Valves, 2 Stints, a Trach and a Pacemaker. I slept thru most of this so I don’t have a long story to tell about this experience.

The next 3 weeks were spent at Select Rehab Hospital located at St. Joe’s in Downtown Phoenix. It is known as an LTAC (Long Term Acute Care) Hospital. It was quite an experience. It was there I was relieved of my Trach, treated for Kidney Failure and other assorted issues. When I saw how sick many people there were, I knew I was not so bad and will hopefully be ok. This place was amazing. Many great Caregivers, some very scary ones and some that had no business being in Medical Care. While I was there, there was only one shooting/knife fight in the ER. I never heard it in the hospital but found out about it on the news. “Select” was quite a Multi-media experience!!!

Once my Trach was removed it was off to Honor Health Rehab Hospital. This hospital was the bridge to going home. I needed to regain my strength, re-learn how to walk and care for myself. We thought maybe I would be home for Father’s Day.

After 10 days in rehab we hit the next “speed bump”, I needed to have a dialysis port removed. It is a simple 10 minute surgical procedure except when you are on Warfarin/Coumadin. Quite simply, they had to take me of Coumadin using a Heparin Drip, do the surgery and then get me back on Heparin. Unbeknownst to me I had SVT https://www.mayoclinic.org/diseases-conditions/supraventricular-tachycardia/symptoms-causes/syc-20355243 . One evening while watching a movie with Scott, my Heart Rate went to 188 Beats per Minute. It was decided I needed to have an “Ablation” to resolve the SVT. The surgery was easy and relatively pain free. The final item that needed attention was to address Gangrene which was in 10 toes and 5 fingers caused by issues during my Heart Surgeries https://www.mayoclinic.org/diseases-conditions/gangrene/symptoms-causes/syc-20352567 . The end result is I hate 10 toes amputated and portions of 5 fingers amputated. The good news is I am already able to walk and I will be able to work around my new finger configurations.

I returned to Honor Health Rehab on July 3rd and now 2 weeks later, I am ready to go home. There are excellent Doctors, Nurses and Physical/Occupational Therapists here. They are serious about the work they do. I have worked very hard every day I have been here. I still have pain in m Hands and Feet but it will eventually go away! I am finally ready to go home after this 105 day journey.

They say ”What Doesn’t Kill You Will Make You Stroger”…I guess I should be Superman. I am not Superman, I wasn’t just given a 2nd chance in life! It has been a struggle for myself, my family and my friends. People have thrown Cindy on a pedestal, saying what a saint she is. The reality is, she is just like all of us. This has been a ride that was very difficult and one that seemed to never end. At the end of the day, we took vows when we were married, part of which say that we will be there for each other “In Sickness and in Health”. Cindy has been a ROCK!!! I would have never made it to today without her. My other 2 rocks have ben Scott and Hillary. They held our lives and family together in so many ways. They have grown and we have all become closer.

Well, my short note got kind of long (and also unedited). To everyone: Thank you for your Prayers, your notes of encouragement and your visits to my many hospitals. I am grateful four the outpouring of love that has gotten me thru this difficult time of life. In a few hours I will be home with a smile on my face and tears of joy in my eyes. I hope to see everyone in the days and weeks to come!!! 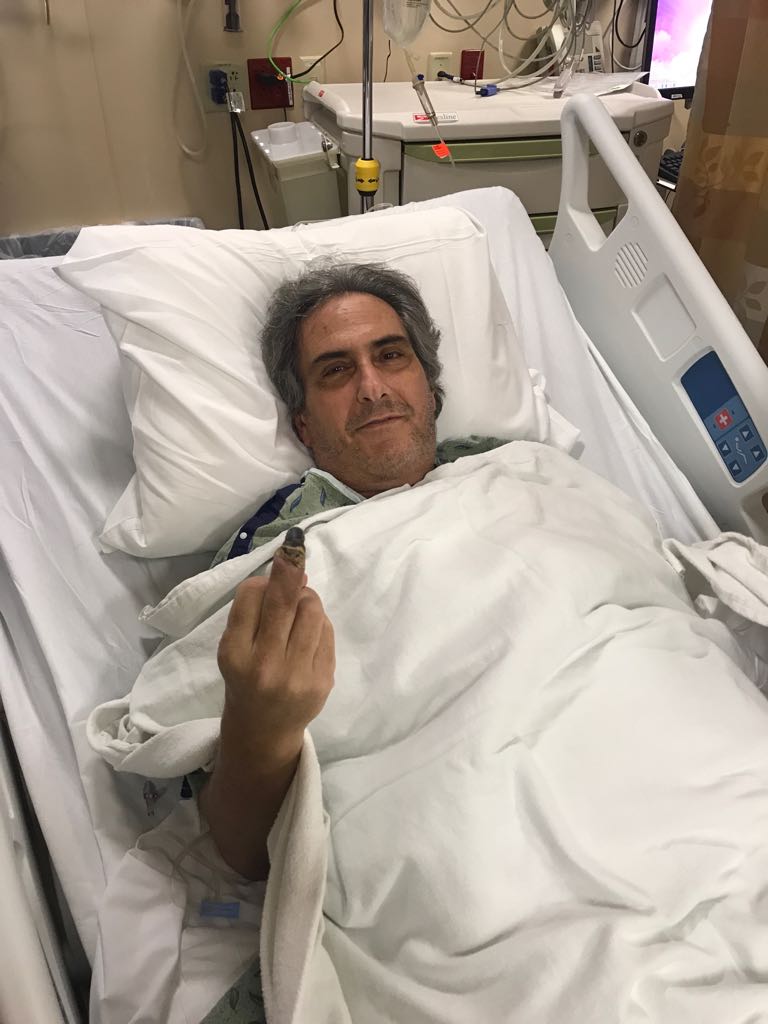 My dad before surgery! Said see you soon!
Day

https://chat.whatsapp.com/JgmaiWr6urVHUAkA2l9rrX If you click on this link you can join the WhatsApp group for constant updates. If you do not have WhatsApp download it and then click this link and it will let you join. Any questions Text Scott at 4802203201

Please feel free to email our family at lorschfamily@gmail.com. You can email us with questions, comments, wishes, prayers, fun stories and memories, pictures, videos, and love. We really love all the support and thank you guys for reaching out to us. Please only send positive vibes and know that my dad is going to make it. These emails are for us to come together as a community for my dad!